Play is the vehicle in which children learn about themselves and the world around them.  It is through the interactions that children have with family, friends, mentors, and peers that shapes their understanding of their subtle and overt social rules in their cultures and in their world.  Without play and the interaction it promotes between children, young learners would have a difficult time understanding how others feel, what they may want and what they may need (Smidt, 2006).   The first quote is by Lev Vygotsky who said, “A child’s play is not simply a reproduction of what he has experienced, but a creative reworking of the impressions he has acquired.”  My two favorite quotes about play encompass these beliefs.

The second quote that speaks to me regarding play is the following below:

It reminds us that play and learning are intertwined and one cannot be present without the other.

Play in my childhood was adventurous and for the most part, it was non-restrictive.  As a child, I pretended and played a lot with my brother and cousins.  In the summers, we played stickball, handball, we ran races against each other, played numerous neighborhood games like steal the bacon, johnny come over, mother may I, red-light green-light, double-dutch competitions and much more.  We played man-hunt during the summer nights and pretended to be married, have families and picnics with our friends.  Growing up in the 1980’s was fun.  My parents and families let us run outside, although they took us to dance classes and music classes during the winter months, the summer months were strictly for playing outside and attending summer camp. They expected us to ride our bikes, use our rollerskates and skateboards acquired through Christmas gifts and we were expected to be home before the street light came on outside.  We had freedom of play, it was magical and liberating.  I learned many physical skills while playing outside many of which were learned on my own or with my friends.  I learned to ride a bike, climb trees, jump fences in a single bound and rollerskate.  All of these skills were practiced daily and kept me physically healthy; most kids I played with were physically fit because of these activities.  Socially, I learned to be myself and not to copy or do everything that others did because, in the end, I learned being unique was gratifying. Play helped me develop physically and emotionally and my parents’ approach made me discover who I really was and what I wanted to grow up to be later in life.

Some of the toys I used during play were Simon.

This was great, you had to rely on your memory to remember the sequenced of colors played by the machine Simon. 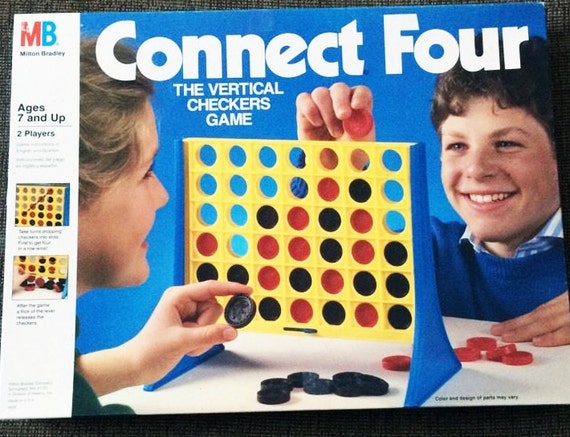 Connect Four was another game I spent hours playing because I loved trying to predict or stop someone from connecting for tokens in a row.  At the same time, you were trying to stop your opponents from connecting four tokens you had to strategize and plan opportunities to make your own tokens connect four. It was fun.

This was my favorite toy and it was very popular in my neighborhood, The Big Wheel tricycle.  I spent countless days sharing this toy with my brother.  It was physically fun and skills building because shortly after we were learning to ride bikes.

Play now for children in our society is very limited, structured and controlled.  I witnessed many families who have enrolled their children in numerous sports which their children are not interested in.  In addition, I don’t see neighborhood groups of children playing neighborhood games.  Moreover, many children have their faces buried in the latest gadgets, ipads, and television and have lost that physical sense of play which is good for their physical health.  Video games with internet links have replaced the social aspect of getting outside to play with others and children have grown used to friends they have never physically met or seen before.  Emotions between children are expressed through emoticons, pictures, and tweets none of which help them deal with authentic physical friendships.   Children currently can stop or terminate any conversation or interaction with a press of a button making them less empathetic and sympathetic to the interconnectivity and intersubjectivity that they may have learned with friends had they interacted less in the virtual reality realm.

My hopes are that somehow early childhood educators, programs, and advocates teach children how to play, facilitate their play and help them to connect and learn from each other through playing.  I hope they learn collaborative skills, empathy, cooperative and social-emotional skills so that they may be able to deal with all the technological advances and social issues in a more positive and healthy way.

The role of play throughout my life and childhood has deepened my awareness of others’ feelings.  I learned how to honor and accept the different and diverse cultures of others through play and intersubjectivity.  As I got older, I used those experiences of diverse cultures to help me connect with children and their families.  Play also taught me to approach things from multiple angles and lenses and it taught me that there are always different ways to solve a problem, I just have to imagine all possibilities.  My hope is that newer generations get to have the same self-discoveries that I had.